UConn's Anna Mae Duane discusses two African American men whose antebellum lives ask a still-relevant question: What does it mean to be American?

Frederick Douglass has a place in American history as a social reformer, orator, and leader of the abolitionist movement, but two other accomplished black men who helped to shape his thinking are mostly unknown to students.

The lives and work of James McCune Smith and Henry Highland Garnet, the sons of enslaved mothers, are the focus of Educated for Freedom: The Incredible Story of Two Fugitive Schoolboys Who Grew Up to Change a Nation, written by Anna Mae Duane, an associate professor of English in the College of Liberal Arts and Sciences.

“The Frederick Douglass we know would not be the same without his friendship with James McCune Smith and Henry Highland Garnet,” Duane says. “They pushed him in different ways.”

Smith became the first black American to earn a medical degree at the University of Glasgow and worked with Douglass to begin the National Council of Colored People, the first national organization for black Americans. Douglass asked him to write the introduction to his second autobiography, My Bondage and My Freedom (1855). 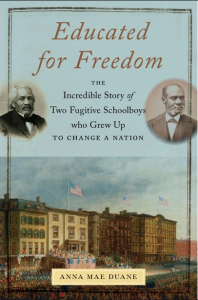 Garnet, a minister, was the first black man invited to speak to the U.S. House of Representatives after adoption of the Thirteenth Amendment to the Constitution, which ended slavery. He and Douglass exchanged barbs in their newspaper columns over various issues, which Duane describes as “like a Twitter beef; they’re really taking shots at each other.” Douglass adopted some of Garnet’s ideas in his own writings about abolishing slavery.

Seeking to better understand how Smith and Garnet — who were classmates at the New York African Free School in the 1820s and achieved high academic success and prominent careers as they moved from slavery to freedom– came out of Duane’s classroom teaching, she says. Students in her African American literature classes enjoyed their reading assignments, but wanted to know more about the real stories of the time, about slavery and the path to freedom.

“You learn about the trauma of slavery over and over again, and then they’re free and the story ends,” Duane says. “You don’t really understand how black people were central to defining what freedom could be, what it wound up being. I think that’s a story we just don’t tell. Their questions [made me realize how much students] want to find out more about what happened.”

Garnet served as a missionary in Jamaica, helped to recruit black men to serve as Union Army troops during the Civil War, then became president of Avery College in Pittsburgh and was appointed U.S. Ambassador to Liberia. He died at age 62 in Liberia.

She says that as they began their lives in a slave nation, Smith and Garnet grappled with a question that still resonates in the 21st century – who gets to be an American? Duane recounts that in studying the internal debate over the direction of education at the New York African Free School, she read the valedictorian speech by 14-year-old James Field, which drew her to learning more about Smith and Garnet. The debate centered on whether to teach students they could advance into a free society or whether to teach them that they had to accept a lower status in the nation.

“The first part [of the speech] is standard, thanking his teachers, telling how much he accomplished,” she says. “The second half is saying that it doesn’t matter, no one is going to hire me. Prejudice is so strong I could have the mind of John Locke and I’m still going to be on the street.”

She says the debate over the direction of the school influenced both men who saw the parents of the school’s students organize a boycott in 1833 to remove the schoolmaster who supported the philosophy of colonization, and hire black teachers. The students witnessed these actions and refused to accept barriers to continued education and a better life. Smith and Garnet were influenced by what they observed as young students, she notes.

“There’s some pretty clear lines from investment in black community leadership, the embrace of both political and sometimes physical resistance,” Duane says. “We see almost prototypes for Martin Luther King Jr. and Malcom X in James McCune Smith and Henry Highland Garnet. One incredibly charismatic, willing to try different things; that would be Garnet and Malcolm X. Radical for his time, Smith was incredibly inspirational and in some ways every bit important as the work of Martin Luther King Jr., who is seen largely as more patient and building from within.

“Both of those men are more complicated than that, both Malcolm X and MLK and my two subjects. But we see this debate playing out. What are the best tactics? Do we build from within patiently, advocate for progress, or push for revolution, within the civil rights movement and in our own political moment? Do we work within what we’ve got or do we need structural change? This is the debate these two men had 20 to 30 years before the Civil War, when slavery was the law of the land. These men didn’t initiate these conversations, but they offer a valuable template for black organizers who had to figure out what to do in a system that was never made for them.”